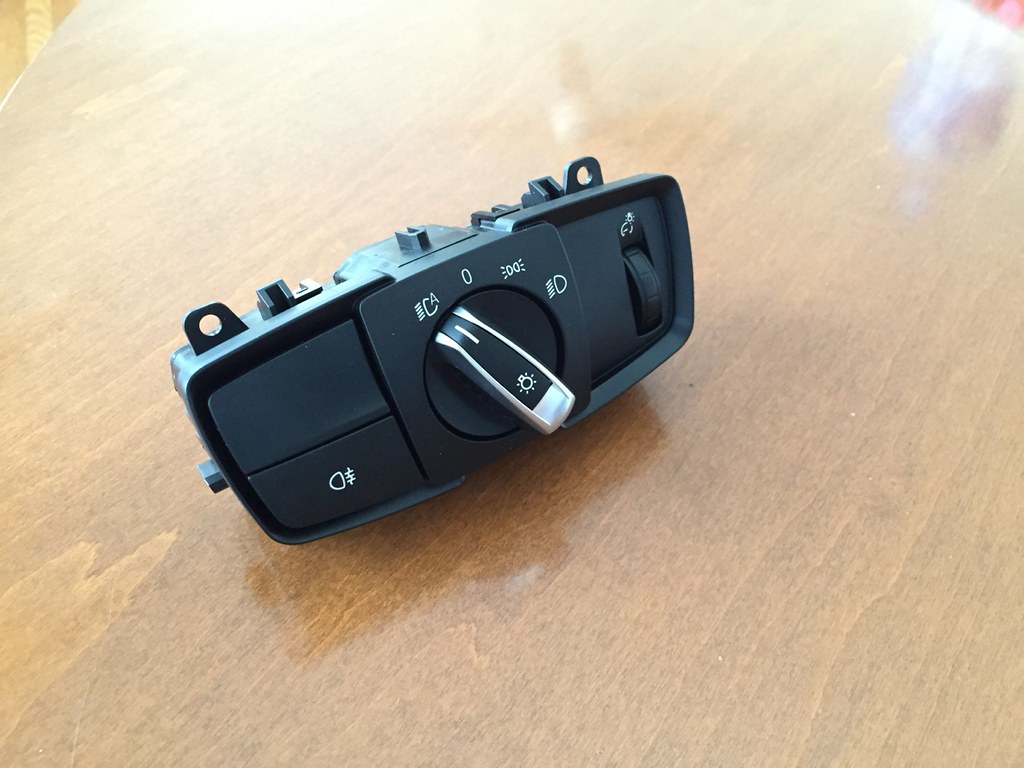 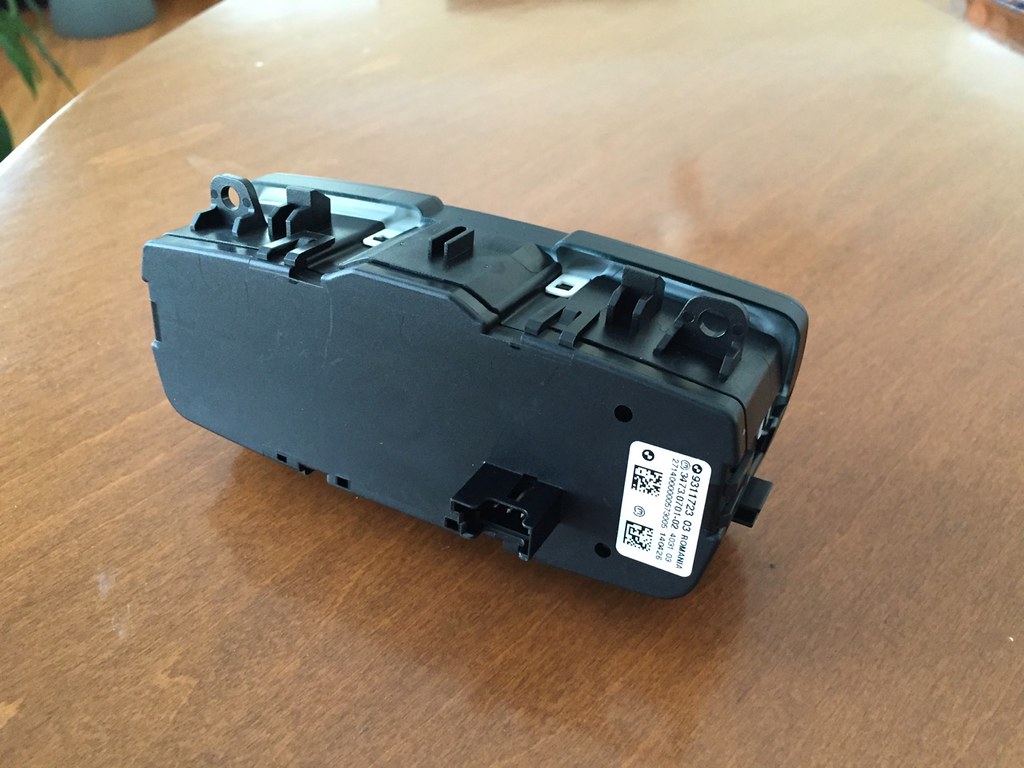 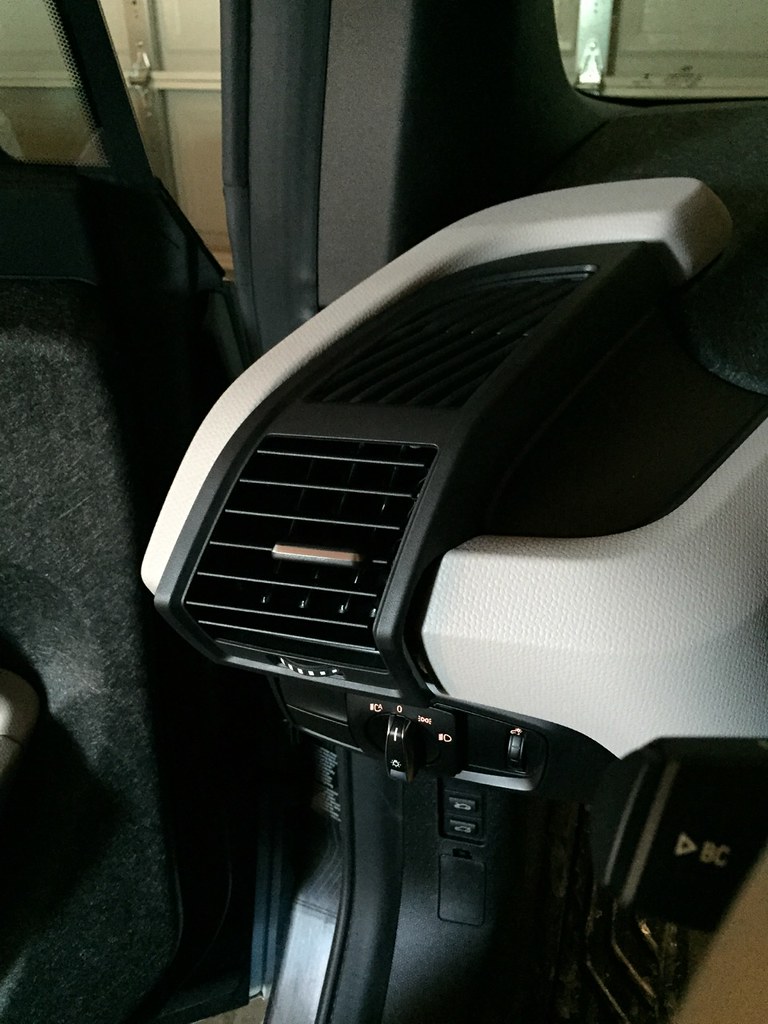 Grab the right side of the vent* and firmly pull straight out to remove. 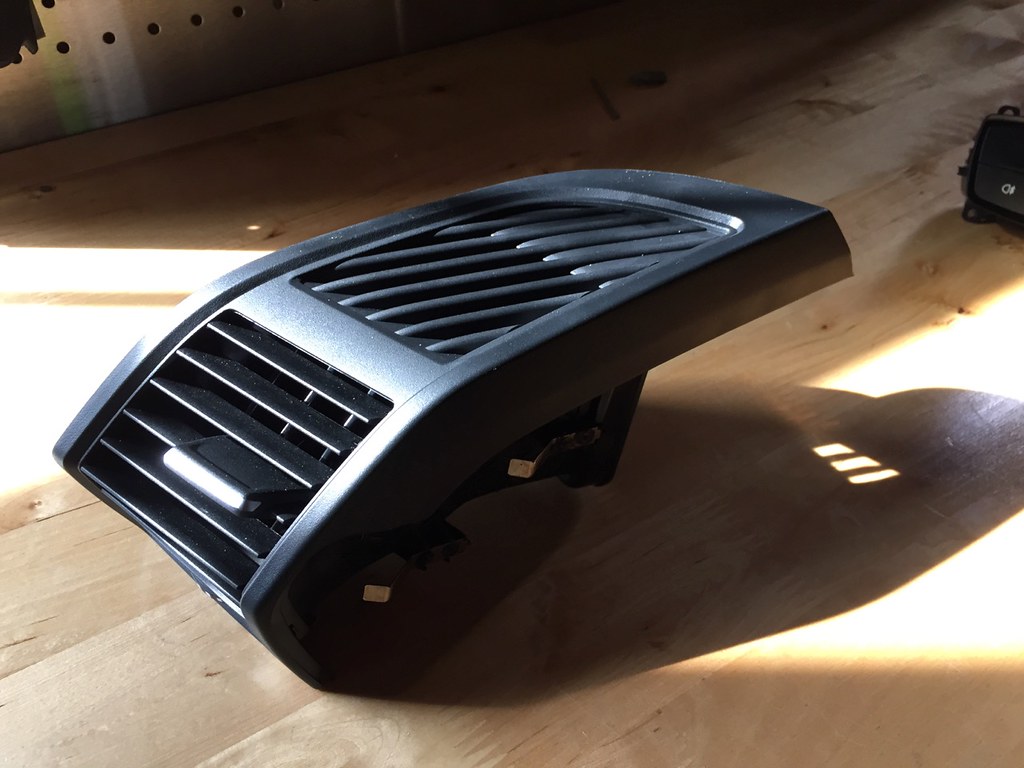 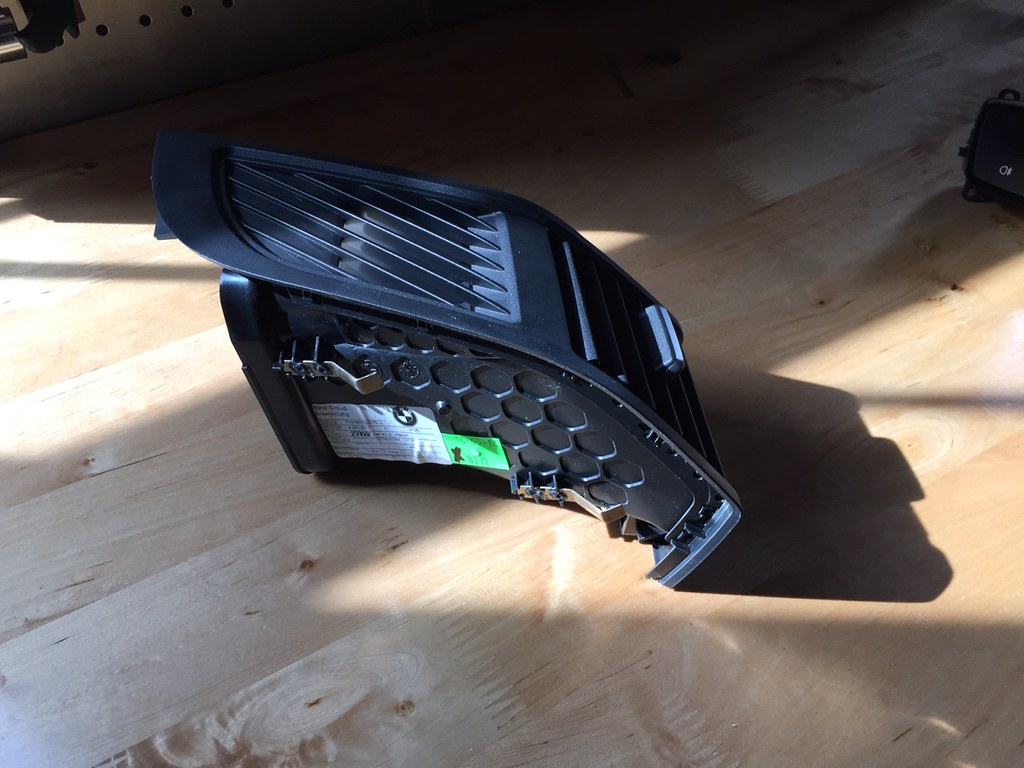 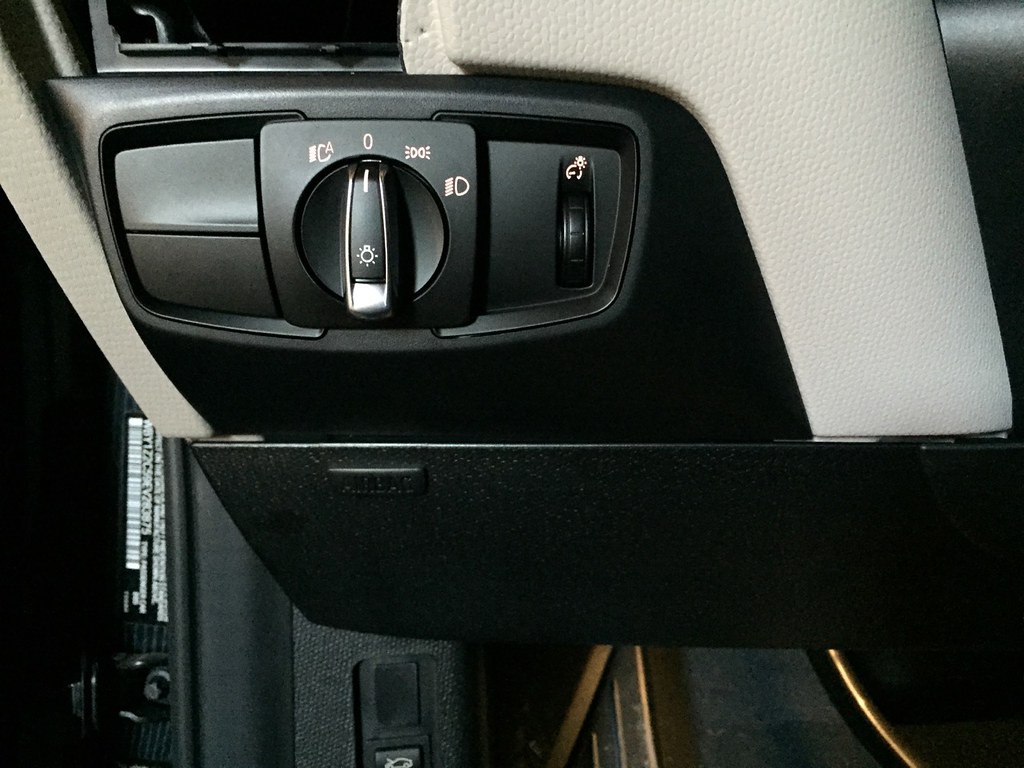 Note bottom seam of black trim piece is behind top of airbag cover. 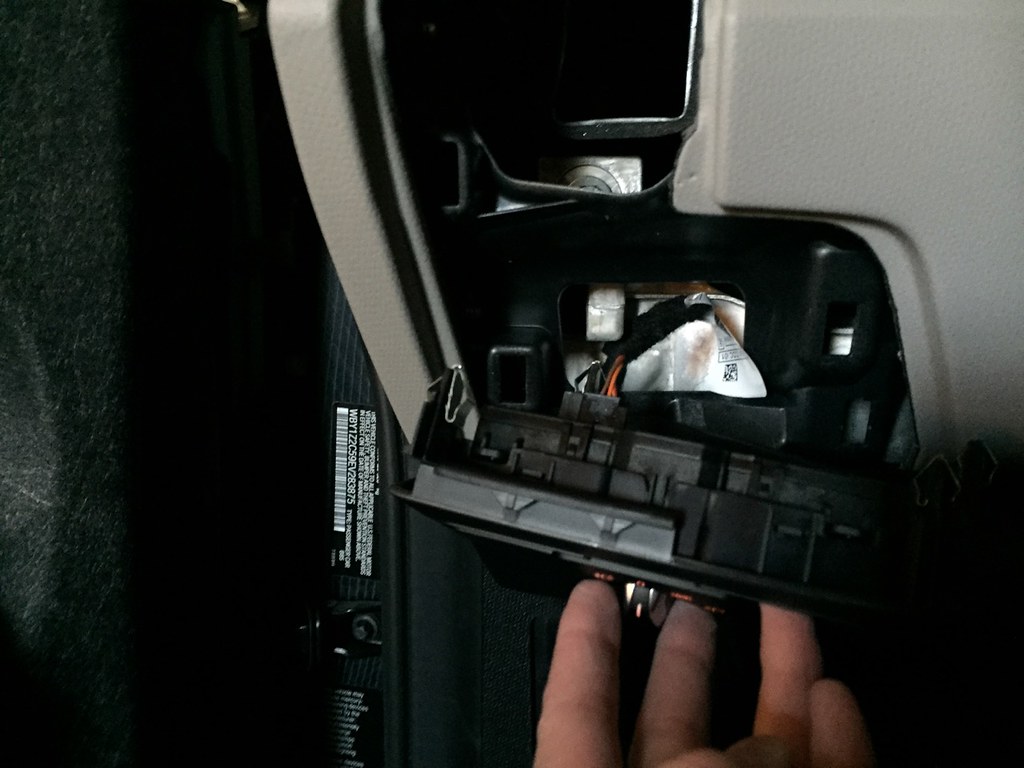 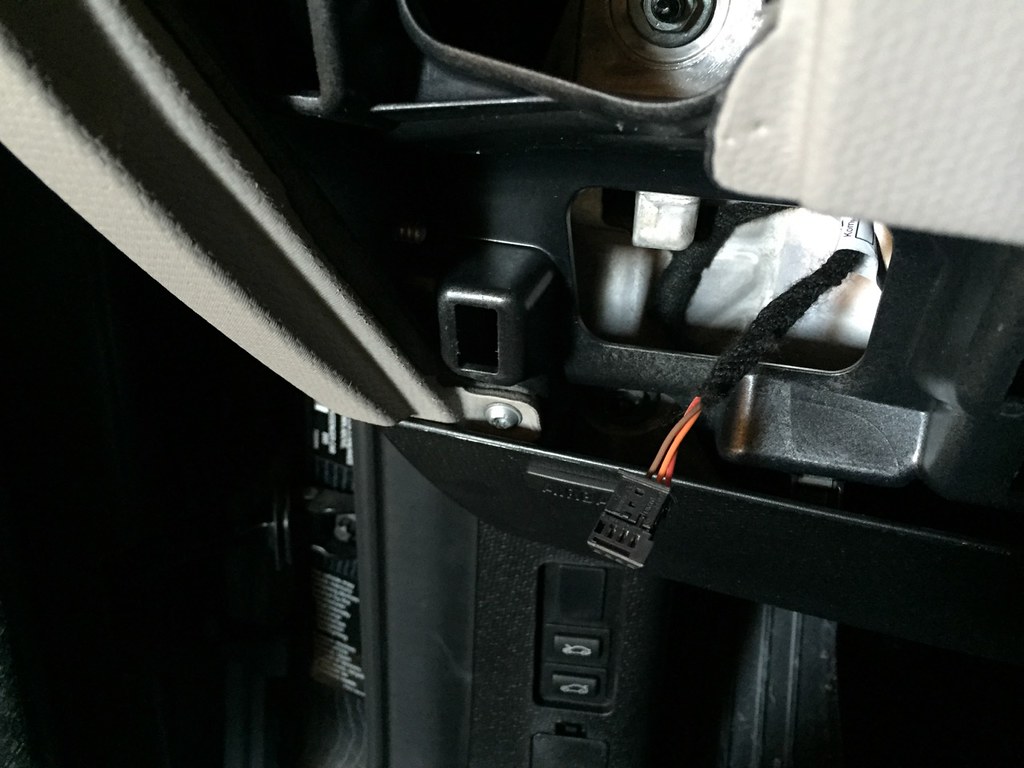 Removing switch plug takes some force. There are no metal tabs. 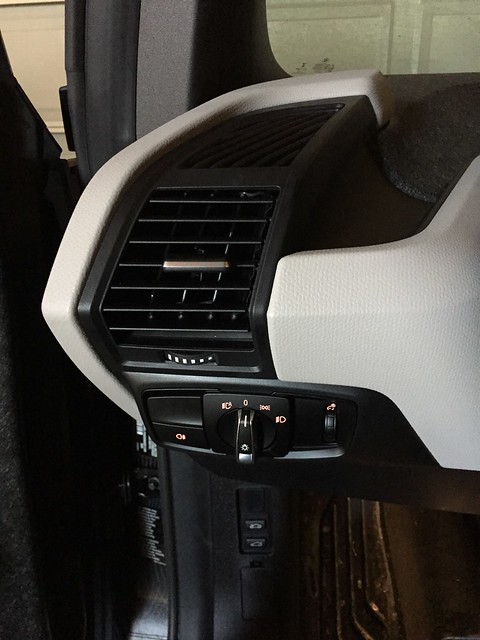 Reinstalled. Four tabs — two on top, two on button — hold the switch inside the black trim. Gently pull away trim from tabs and slide out light switch to remove. (Forgot to photograph.)

After taking delivery of the i3 in November, the first to-do on the farkle list was installing a Euro light switch. I live in a rural, and often foggy, area and having this option brings me peace of mind. The switch arrived on Valentine’s Day, nearly three months later. Waiting** was the most difficult part of this install.

On two previous 3-Series (E46 and E92), the Euro switch was plug-and-play. It activated the rear bulbs and awakened the icon in the instrument display, with no coding required. This isn’t the case with the i3. After plugging it in and pressing the rear-fog button, no lamps illuminated in the rear bumper, and the icon in the instrument remained dark. So I cracked open the world's worst laptop.

Bulb 7 is the rear-fog light, according to the BMW training manual, and their designation trumps all. Forum member PhilH, who is in the U.K., confirmed that bulb 7 is the one linked to the switch from the factory. I hoped coding these settings would illuminate it and the instrument icon:

Coding 3068 NSL_Verbaut activated only the icon in the instrument cluster; all bumper lights remained dark. But adding 3064 > Mapping_Nebelschluss turned on bulb 5, which BMW designates as turn signals. These flash as the emergency lights when the trunk is open. The brightness of bulb 5 is similar to the tail light (1). Until I can figure out how to activate bulb 7, these will do.

Codes from the F30/F32 cheat sheet compiled by Halsifer. Many work well in the i3.

* It’s remarkable how weightless the vent and trim pieces feel. BMW and its vendors sweated over every gram in the i3.

** As forum user SSi3 noted, the rear-fog blank in the U.S. light switch might be modified to activate the rear fog. That would have shortened the wait. Trimming the tabs, though, seems tedious. I'd mess it up. But savings galore if you can pull it off.
Last edited by websterize on Wed Jan 23, 2019 7:24 pm, edited 1 time in total.
2018 i3 Sport BEV | Coding spreadsheet

Too bad that it isn't a simple switch swap like many of the other BMWs out there (I did swap the switch on my GT to enable the rear fog lights, and it took all of about 10-minutes - no coding, just the switch swap). Not everyone is willing to get setup to code their vehicle and the required learning curve to accomplish it.
Jim DeBruycker
2014 i3 BEV, 2021 X5 45e
(The i3 will be sold soon, <17K-miles, interested?)

Yes, bulbs 4 and 5 activate. That's why I'd like to figure out how to link 7 to the Euroswitch. That's how it was designed.

There's a bank of LEDs in the bumper.

Photo by Dan Wang via Facebook i3 page (not mine, thankfully)
2018 i3 Sport BEV | Coding spreadsheet

I guess BMW has wised up to the "free" method, perhaps another 2015 change if you are able to do it on 2014's. I have mine removed in an attempt to do the free button mod, if you remove the two tabs that ours use to keep the button in, then it could just pop out the front at will, I also don't think removing these tabs will allow ours to travel any further inward. Oh well, it was worth a shot, only took about 10 minutes to remove. Thanks for the post OP!

EDIT: It looks like, however, the switches are the same and possibly the wired pigtail is the same so one might be able to find one used on eBay from a totaled F car and perhaps swap it into the i3. I may look into this. I would also love to find out if there is some way to add front fog lights to the i3. It would have to look classy and OEM though. I bet we'll see them at face-lift time (~2017).

Is the top left blank actually used for anything in any region?

This might be off topic, how can I access to the reverse lights wires since they are in the bumper?

I want to add a reverse camera since my car don't have the parking package, I need to tap into the reverse light circuit to activate the camera. Do I have to remove the bumper to get access?