I have a recumbent, folding tricycle that I regularly carry in my i3. That was a deal breaker...if it didn't fit, I wouldn't have bought the car! FWIW, it's an IceTrike Adventure model. My ICE can sit in the garage with a battery maintainer on it for months between uses. The vast majority of my driving is local, less than 10-miles, so the i3 is ideal. When I do need the ICE, it might go for a few thousand miles before finding its way back to the garage.
Jim DeBruycker
2011 535i x-drive GT, 2014 i3 BEV
Soon (hopefully!) A 2021 X5 45e will replace the above

Here's a load that has a low "wow factor" and isn't going to win any awards for specialousness, but it is representative of our typical morning trek: two boys, their backpacks, a trumpet, my work bag and overnight bag, lunch bag, dry cleaning, and some miscellanea. This is close to max load for the i3 trunk -- maybe fill it out with a couple of heavy winter coats. 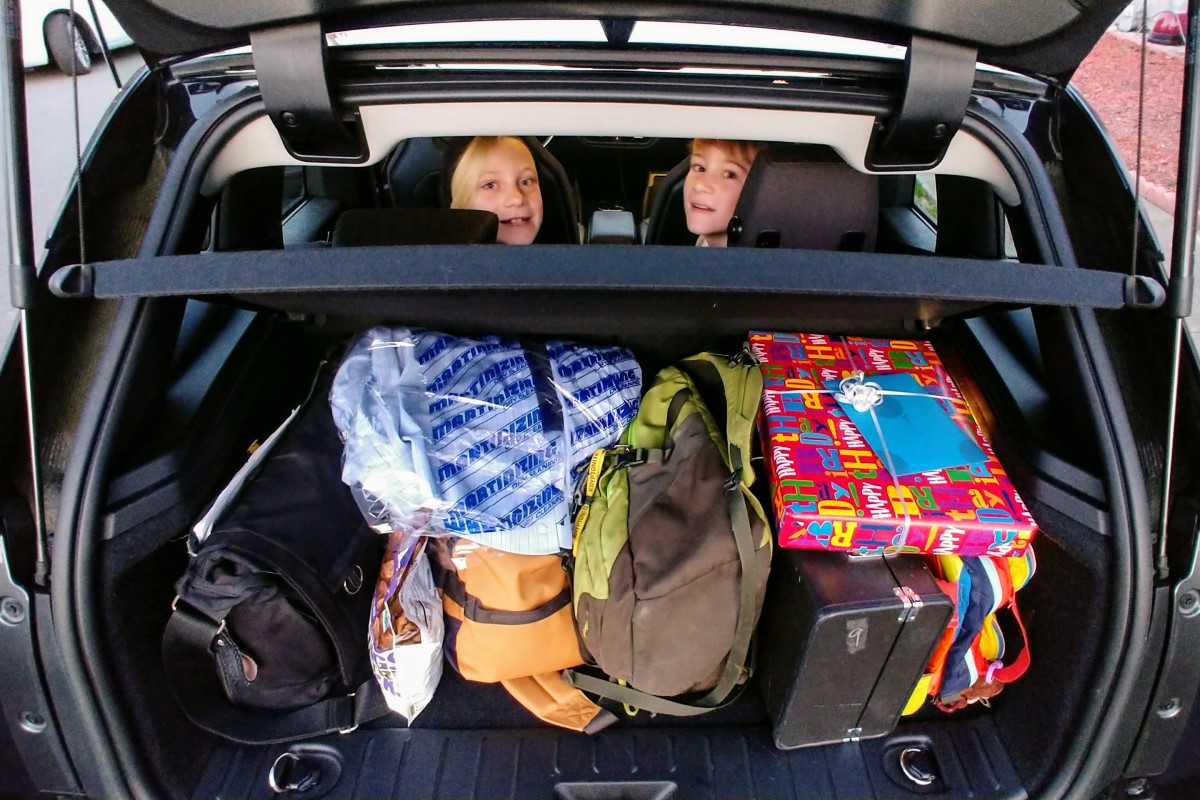 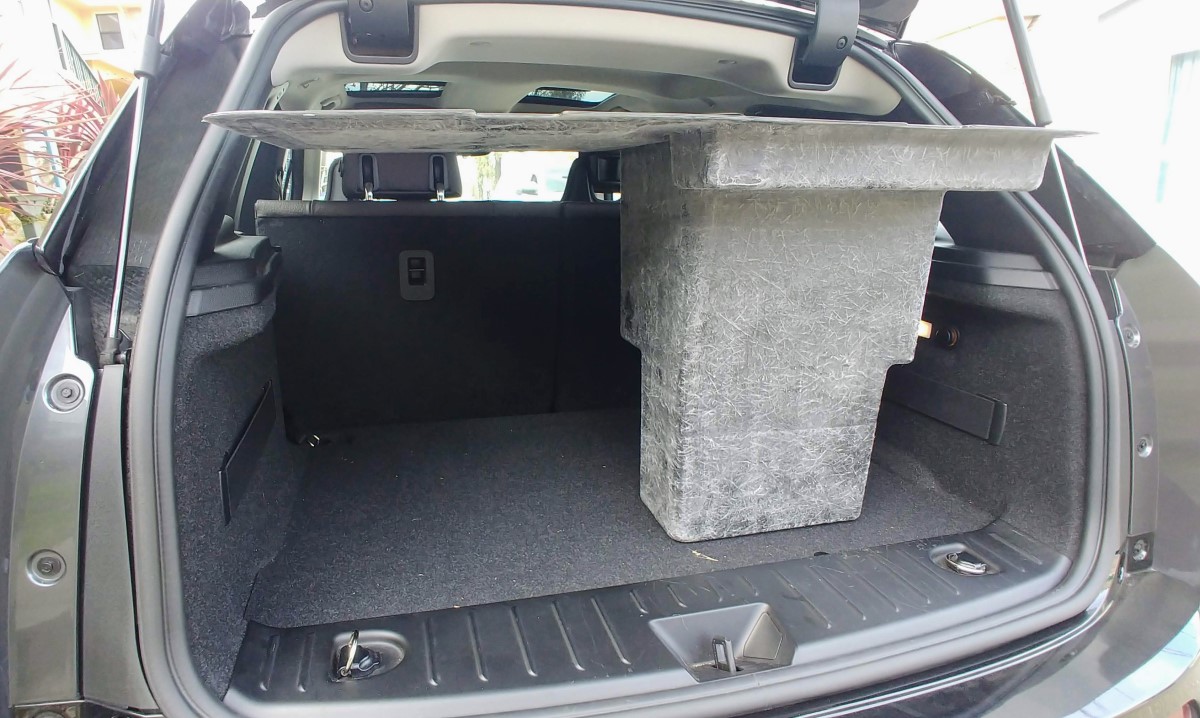 Especially for a fellow BEV owner who has considered such a cargo extender. Unfortunately, shipping costs to Honolulu make the cost way more than I want to spend.

I also wonder about how such an extender would work in practice. How accessible is the extra capacity? The cargo area carpet would need to be lifted, right?

If one placed a small heavy item on the carpet over the extended cargo compartment which has no hard cover, would the carpet support the heavy load?

Especially for a fellow BEV owner who has considered such a cargo extender. Unfortunately, shipping costs to Honolulu make the cost way more than I want to spend.

I also wonder about how such an extender would work in practice. How accessible is the extra capacity? The cargo area carpet would need to be lifted, right?

If one placed a small heavy item on the carpet over the extended cargo compartment which has no hard cover, would the carpet support the heavy load?

For me , ideal solution is building a similarly volumed extender, dropping a massive subwoofer and amp in it, putting the alum cover back on and never looking back. I dunno, maybe something like a 700RMS sub, just dumping massive bass.

I find this little car so practical for carrying cargo, I've really never considered adding more space. I fill it both in volume and weight loaded. It's amazing. I cant remember how many rolls of romex I was able to fit last time.....50 rolls? probably. lol. I need to remember to snap pictures next time. 800lbs of cargo is a cakewalk.
Am I trashing it?, absolutely, but with love, like every other BMW I've owned.
Rondel stands for something, and I fully utilize all the non neutered abilities its got.
Takeaway. This is an amazing piece of engineering. And I'm not impressed with 'stuff'

I ought to put this in a new thread titled "BMW i3 Runflat Tire..."

My wife's runflat has run flat again. Bridgestone DriveGuards cost a fortune and don't seem to last that long. But this one got her home. Puncture is in the sidewall so can't be patched. Looks like I could carry two of these in the i3's cargo space (to and from the tire shop -- not as spares!!) and maintain my family duty rating of four passengers. Single tie-down strap to the rear floor loop, and with the tire angled all the way out so that the inside of the hatch just touches it when it closes. (Two tires would be standing straight up, and I'd use both left-side tie-down loops.) 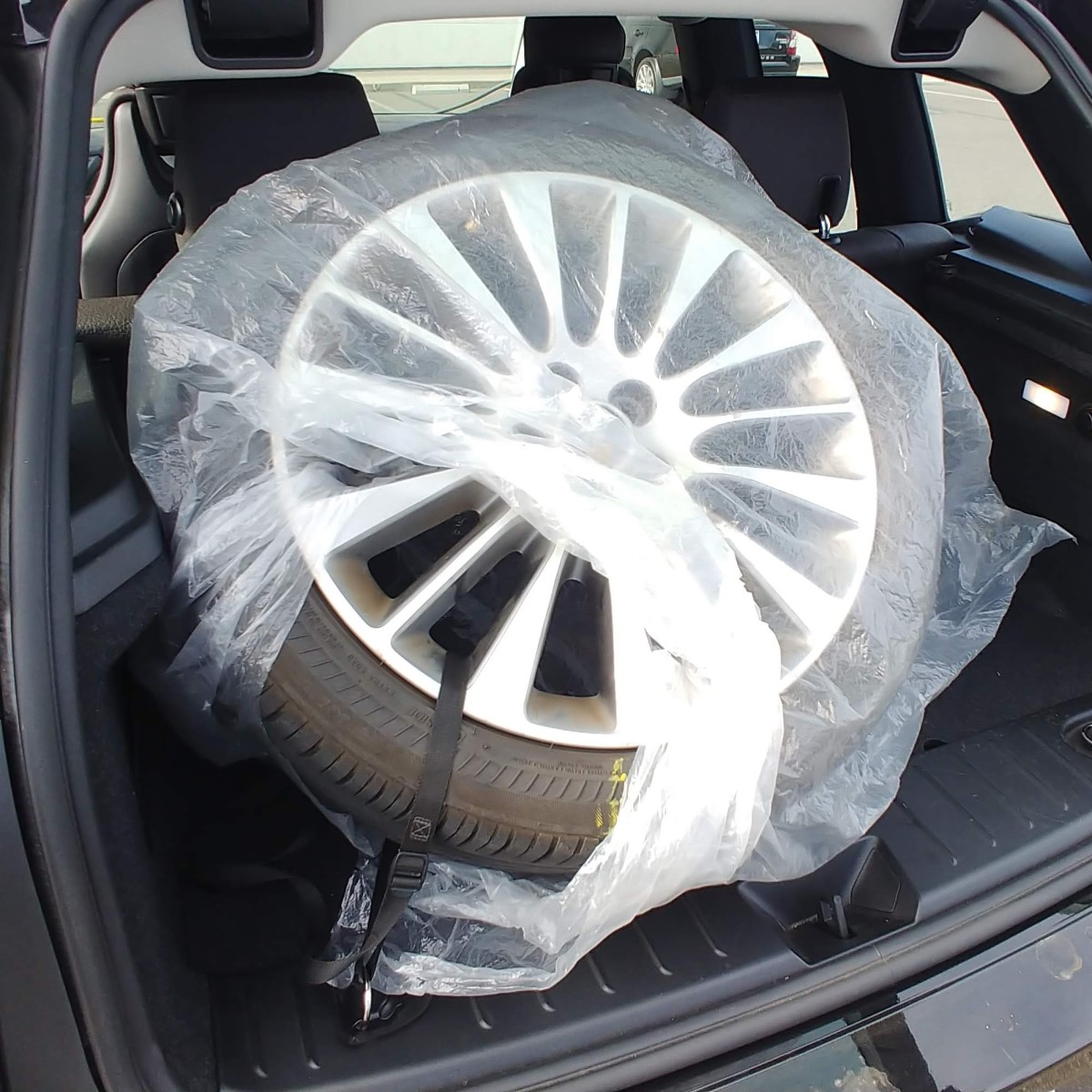 Ok, this one was basically a cargo carrying fail, saved by desperation. That's a whole lotta disassembled bike piled up in the back, plus the kids. TL;DR is below.

First off, shout out to BicycleBlueBook.com in San Jose -- if you want a used or potentially new bike for cheap, add them to your list. They're on eBay and they ship, too. This is my third bike from them in the past year. They're not perfect, but many of their bikes are a really good deal.

I loaded up my SeaSucker folding cross bars + Yakima BOA bike mount and a pair of bike helmets, along with some of the usual payload: my overnight and messenger bags, one kid backpack, some parts for a school science project, along with both kiddos, for a jaunt from Oakland to San Jose to pick up a bike.

With the lockdown and all the "free" time, I decided to pick up an electric bike for my wife for riding around our hilly neighborhood. Our bike rides together always involve loading up the mountain bikes and driving to a trail, and I was thinking it would be awesome for her to have a utilitarian bike as a means, something she can use instead of the car, without it being "a bike ride."

for our pre-paid pick-up. The first thing I notice is the 500-mile used Trek I'm being handed is the Wrong. Friggin. Size. They had it incorrectly listed as a Medium (17"), which would have been right at her threshold of being too big; in actuality it was a Large (20") which wasn't even close to cutting it for a 5'6" woman.

As an aside, I don't know how it is in other areas, but my county has deemed bike shops "essential service" status under transportation. As far as I know, they're closed as walk-in showrooms, but are permitted to service bicycles and can sell bikes, and the ones I'm familiar with are doing online purchase / in-person pick-up. Granted, we've driven into the neighboring county, but seems similar rules are being followed. During our 45 minutes we were there five other like-minded customers pulled in to complete similar transactions -- one in a brand new Model Y. 8o Nobody else got the wrong size bike or required disassembly to get them in their vehicles, so as you're about to find out I was just double-blessed with stupid luck / inept planning this day.

The employee there sincerely apologized for the size listing error, and swiftly refunded my PayPal. But I had had my eye on another bike they listed with all of 2 miles on it, a Raleigh that they took as overstock from another bike shop. I gave him the oh woe me and he disappeared inside. When he returned he politely chopped the price down to within $200 of the used Trek's price. In keeping with policy, he emailed me a new "invoice," and I paid "online" -- from my phone, 6 feet from their front door, all legit and contactless. It wasn't the deal I was hoping for, but nevertheless a steal for a last-model-year essentially new bike.

I wheeled the new bike over to the i3 and installed the Sea Sucker crossbars on the roof, grabbed my Yakima Boa, and... WTF? The Yakima round bar clamp diameter is different than the Sea Sucker! Yep, today's SECOND size discrepancy! I don't know how this significant detail escaped me. The Yakima High Road racks that I normally use with these crossbars have done away with the familiar Yakima clamps / brackets, and use straps instead, so this was the first time I've run into this problem.

Well dang, now I've got this full-sized 48 pound bike, 700x50c wheels / tires, full fenders, and I'm one person short of a fully loaded i3. Visions of both boys strapped into the front seat scooched all the way forward, faces up close to the dash, just wasn't cutting it for a 30 mile drive home.

I don't want to make this ordeal out to be an unmitigated disaster, but I busted out a 5mm allen wrench and removed the stem, so that I could remove the fork, so that *clink clink clink* I could drop pieces of the headset all over the parking lot. Thankfully the ball bearings were caged and they more-or-less stayed put. Both wheels and the seatpost removed, and we managed to squeeze just about everything back in the car to where my youngest had a comfy wheel to lean against / doink him on the noggin for the schlep home. The cargo bay lid slid into the gap between the front passenger seat and door. Only one minor tire scuff mark on the headliner! I left the naked crossbars attached to the roof; there was really no good place to put them inside.

Moral of the story is... make stories! Today was the first day my 8 year old excitedly wrote a complete full-page journal entry without much cajoling. Guess who got the first ride on my wife's new bike once we cobbled it back together?