So, I finally got my 2017 cpo rex. Battery is only about 60% full, but since I have a new and never used level 2 charger at home I told them to just disconnect from their charger and brought it home. Now when I plug it in the charge light stays white. However, I see a plug symbol pop up on the dash and my dumb, very little feedback charger has a green line light up.

I'm confused. Not sure if somehow the PO coded the light to not turn blue, or if it just isn't charging or what.

Nope, checked that. It was even dumber.

The charger has a camouflaged power button on the side (facing away where I didn't notice). Amazing how turning the charger on makes the car actually charge.

Ya, that's my idiot moment for the week.

skeptic wrote: ↑
Fri Apr 24, 2020 5:50 pm
The charger has a camouflaged power button on the side (facing away where I didn't notice). Amazing how turning the charger on makes the car actually charge.

I like that your EVSE has a power switch which seems like an unusual feature. Most seem to be always on. I added an in-line power switch to our JuiceBox's charging circuit so that I could turn off our JuiceBox except when charging is occurring. All EVSE's consume a bit of power when idling which feels wasteful to a guy who uses switched power strips for all appliances without power switches that actually power down the appliance (e.g., TV, Apple TV, WiFi router).
Aloha,
Art
2014 BMW i3 Arravani Grey, Giga World, Tech + Driving Assist, Parking Assist, DC Fast Charging, JuiceBox EVSE

What kind of charger is this, in case someone is searching for this solution in the future and finds this thread?

When you plug it in (with switch off) it appears to come on. LED screen lights up with info, green light on and all. Then plug it in the car and the green light becomes a long green line - so it really appeared on to me until I found the little push button on the side....


This is the one I bought, although I bought it from e-bay because at the time Amazon was showing 3+ weeks for all their chargers (and pretty much everything else). You can see the little button on the side in the main pic. Where mine is installed that side is away from where I walk up and close to a freezer... I never noticed it until I was feeling around.

You can see the button on the side in this pic (ignore the plugin, mine is a nema 14-50 but the box itself is the same): 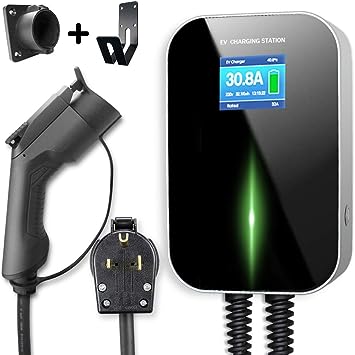 It sounds like that is not really a power switch for the unit since the display works unless it has a built-in battery. From the sound of it, that switch may interrupt the interlock telling the EVSE to enable power to the vehicle. If it were truly a power switch, it would need to be way bigger that what is shown to handle the current.

It could be useful if the unit was inside, but you kept the plug outside to prevent someone just plugging in and using your power. It would be more useful if they configured it so that you could control that circuit with a remote so that you could turn the thing on/off from charging when you wanted with some home automation.
Jim DeBruycker
2014 i3 BEV, 2021 X5 45e
(The i3 will be sold soon, <17K-miles, interested?)

Right - the unit appeared to be on which is why I didn't originally look for a power switch. Pressing the little button on the side will turn the led screen on/off (after initial plugin to the wall and boot up, the screen is on then counts down and goes to sleep). Obviously car charging goes on/off with the screen. The vertical green line is always on, and changes length depending on whether or not it's plugged into the car. Not how I'd expect the power button to work, I'd expect all or nothing, but now that I know I'll just leave it on and not worry about it. My wife has a TV in her office that despite me making the occasional comment is on 24/7/365, lots of other electronic stuff always on, and being a big (not huge) old and probably not well insulated house the central HVAC systems get a work out. In the grand scheme of things I can't image an led screen and whatever monitoring it's doing to show up in my electric bill.

Here is the important part now that I know how to turn it on. I plug it into my car, it charges my car at ~32 amps. Later, the battery in my car is full.

Return to “News and Main BMW i3 Forum Discussions”